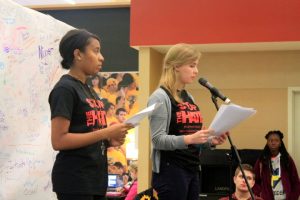 Diversity Peer Educators (DPE) started in 1997 as a student organization called Students Accomplishing Diversity Enrichment (SADE).  After two years of hard work and receiving the Columbia Value Diversity Award, the group disbanded.  That is when it was decided that it should be a Multicultural Center program.  Dr. Michael Lowey and Pablo Mendoza hosted the first Train the Trainers in 1999, where the first DPE’s were trained.

They learned frameworks from UMASS Social Justice Program, Sociological and Psychological programs from UCLA, and the National Coalition Building Model (NCBI).  Today, DPE holds at least one Train the Trainers a year. Through these trainings, DPE has mentored start up programs at Missouri Science and Technology, UMKC, Westminster, DePaul University in Chicago, Southwest Illinois Community College, and with Illinois State University Residential Life.  Now approaching its fifteen year anniversary, DPE is more influential than ever, it’s success being presented at conferences such as MoCPA, NASPA, and NCORE.  We look forward to the next fifteen!